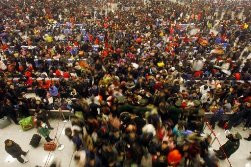 BEIJING — More than 100 million Chinese farmers will move to cities by 2020, posing huge challenges for urban planners and already stretched social welfare systems, according to a new official forecast.

China has seen an unprecedented wave of urbanisation as millions of migrant workers have flooded cities to provide the cheap labour that has helped the world’s second-largest economy achieve breakneck growth.

A new government report released to some state media on Sunday said the urban population would top 800 million by 2020, up from 666 million in 2010, as more rural Chinese sought better incomes in the cities.

Despite living in cities, migrant workers are still registered as rural residents. As such, they have little or no social security and are charged huge fees to send their children to public schools, forcing some to forgo education.

Unlike their parents, young migrant workers — the second generation — are aware of their rights, and they are increasingly frustrated with the treatment they receive in cities.

In June, three days of riots in the southern province of Guangdong broke out after rumours spread that police had beaten a street hawker to death and manhandled his pregnant wife.

The protests in the manufacturing hub were the latest in a line of incidents of unrest, which analysts say highlight the frustration felt by migrants over what they see as unfair treatment and anger at the widening wealth gap.

The government forecast was based on a survey of migrant populations in 106 cities last year.

It found that 20 percent of migrant families spend more than they earn, while fewer than half have any medical insurance or pension provisions.

It also showed the new generation of migrant workers — born between 1980 and 1994 — were better educated than their predecessors, with five percent educated to college level.