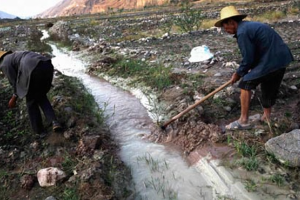 Nearly 20 million people in China live in areas at high risk of arsenic contamination in their water supplies, according to a study published recently.

The Chinese government has labelled arsenic contamination, which it first diagnosed in China in the 1970s, as one of the country’s “most important endemic diseases,” due to the chronic side effects which include cancers, diabetes and cardiovascular diseases. China has been undertaking time-consuming testing of wells but the process could take decades to complete, prompting the researchers of the new study to produce a computer model able to predict which areas would be most likely at risk.

The model found 14.7 million people at risk of water contaminated with levels higher than the World Health Organisation’s recommended limit of 10 micrograms per litre, with almost 6 million at risk of concentration levels of five times that number.

“In areas of high population density, the risk of high arsenic contamination is much more [than the average levels throughout China], especially in the Huai River [ in Central China],” said Dr Guifan Sun, China Medical University dean and member of the team behind the work. “These areas should be tested as soon as possible and I think after our paper is published, it will make the Chinese government pay attention.”

“This is a global issue,” said Michael Berg, another member of the team and a senior researcher at Eawag, the Swiss Federal Institute of Aquatic Science and Technology. “Potentially, 140 million people are at risk of consuming arsenic contaminated water daily world-wide.”

The researchers created the model using publically-availabe information such as wetness, soil and other indicators of where contamination is likely to be high, combining it with population data, arsenic concentration levels from their own field tests at thousands of villages, and the Chinese government’s own testing of wells between 2001 and 2005.

Luis Rodríguez-Lado of University Santiago de Compostela in Spain and the lead author of the work, said: “The foundation of our model was based on arsenic measures in 2,600 villages in six provinces in China. Our study has been going on for five years, linking it with the previous studies by the Dr Sun and his team with the Chinese in 2005.

“With the use of data collection and statistical analysis, we were able to create a map of areas where the probabilities of arsenic concentration was higher than the average 10 mg per litre in the whole of China.”

Dr Sun said that without the new model, results could have taken more than 20 years to appear. “This was the reason for the urgency. We will give advice to the government on how to test these predicted areas.”