1000’s Fish Dead In The Philippines 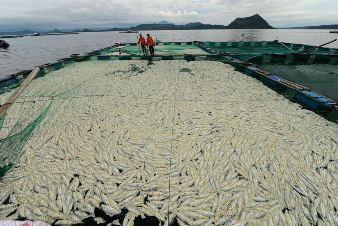 Several lakeside towns in the Philippines are struggling to cope with mountains of rotting fish that were killed by a sudden drop in water temperatures at the weekend.

The Bureau of Fisheries and Aquatic Resources says more than 750 tonnes of fish have died since Friday in Taal Lake near Manila, hitting several towns whose economies are heavily reliant on the fishing industry.

Scientists say the onset of the rainy season led to a sharp drop in water temperatures that depleted oxygen levels in the lake.

Most of those killed were milk fish and tilapia being commercially bred in cages along the lake’s shores.

“There are just so many dead fish,” said Zenaida Mendoza, mayor of Talisay, one of the worst affected towns.

“Fishermen are hauling them manually using their boats and bringing them ashore. But the rotting smell is overpowering and could pose a health risk.”

Ms Mendoza says sanitation and health officials are working flat out to dispose of the dead fish, although many remain exposed to the open air due to a lack of suitable sites to bury the hundreds of tonnes of carcasses.

Volcanologists say the incident is not related to recent activity of Taal Volcano, which lies in the middle of the lake and has been rumbling for over a month.