107 Dead As Storm Topples Crane On To Mosque 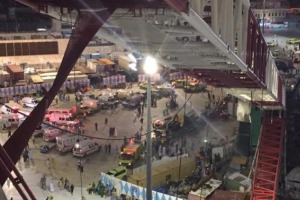 107 people have been killed and 238 injured when a crane collapsed in Mecca’s Grand Mosque, Saudi Arabian officials say.

Authorities say storms are believed to have caused the collapse.

It happened as Mecca prepares for the annual Hajj pilgrimage later this month, where millions of Muslims are expected to arrive in the Saudi city from across the world.