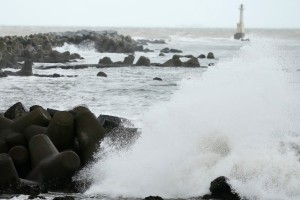 MORIOKA —
About 1,600 people are stranded and 17 are unaccounted for in the northeastern prefecture of Iwate Thursday after Typhoon Lionrock battered the area Tuesday.

Local authorities said that some 1,600 people in eight municipalities are stranded. The municipalities include the town of Iwaizumi, where nine bodies were found in a nursing home, with town officials saying they have lost contact with 17 residents, mostly elderly people.

Authorities are unable to approach the affected areas by road due to flooding and damage, they said, adding that members of the Self-Defense Forces and police are trying to assess the situation and mount a rescue operation, according to the prefectural government.

Since electricity and water have been cut off in Iwaizumi, the municipality decided to airlift about 30 residents in need of dialysis to hospitals in Morioka and elsewhere.

A total of 36,582 residents of 15,780 households in the town and Kuji have been advised to evacuate due to potential mudslides and other risks.

They recovered a vehicle belonging to Yohei Suzuki, one of three, from a river in the town of Taiki, but no one was found inside.

Police are continuing to search the area as well as the towns of Shimizu and Shintoku.

According to the Japan Meteorological Agency, another typhoon, the 12th of the season, emerged south of Okinawa Prefecture and may make landfall on Saturday after approaching western Japan.