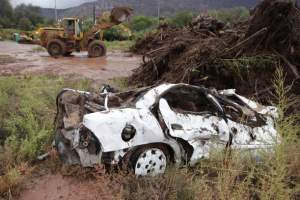 Search teams including a crew that combed through the rubble of the Twin Towers on 9/11 are looking for a boy who remains missing.

Rescuers have retrieved the bodies of several children who died when two vehicles were swept away by floodwaters that killed at least 18 people near Utah’s border with Arizona.

The vehicles were carrying three women and 13 children when a wall of water carried them hundreds of yards downstream in the small town of Hildale.

One of the vehicles, an SUV, was smashed beyond recognition. The children killed ranged in age from four to 11 years old.

A six-year-old boy remained missing as of Wednesday afternoon.

Only three people survived, all of them children

One boy escaped by cutting through an air bag, climbing out a window and jumping off the roof of a vehicle.

Multiple search teams have been involved in the recovery effort, including one crew that helped comb through the rubble of the World Trade Center after the September 11, 2001 terrorist attacks.

Meanwhile, another six people have been confirmed dead in Zion National Park to the north, and one is missing.

The group of seven hikers in their 40s and 50s set out on Monday before park officials closed the area due to flooding.

Park Rangers said the group was alerted to possible flooding before they entered Keyhole Canyon, but there was no way to warn them once the fast-moving waters began to rise.

Crews have been working since Monday night to search the banks of Short Creek amid ongoing rain showers.

Heavy equipment has been used to clear mud and debris, and the National Guard has been called in to assist the clean-up operation.

Utah Governor Gary Herbert said he was “heartbroken” by the tragedy, and that the state has offered its full resources to Hildale to aid the search and rescue effort.

Brian McInerney, a National Weather Service hydrologist in Salt Lake City, said the torrent had been a “100-year event”.

Residents have described the floods as the worst in living memory for Hildale and its sister town of Colorado City, in Arizona.

The floods were triggered by heavy rain in canyons north of the towns, funnelling waves of water through the streets of the town.