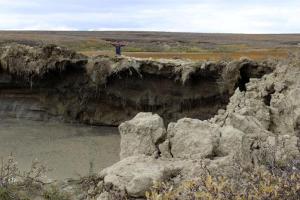 The end of the world could be near, not because of a cosmic explosion or an asteroid attack, but because of methane. The discovery of the first mysterious crater and then two other large vents has led researchers to issue a warning of spontaneous explosion in Yamal, a frozen Siberian wasteland.

The first 80 meter-wide (262 feet) ent was discovered by oil workers. Later, two more massive vents were discovered in the area, and the number has reached 20 as of September 2015. Some said that these vents were the “hellmouths,” while others believed that these were created by something extraterrestrial. However, Russian scientists had a different point of view.

The team of Russian researchers at the Trofimuk Institute of Petroleum Geology and Geophysics discovered that the craters were actually the massive explosive vents with a large quantity of methane gas. The team’s findings were based on the results of an expedition carried out on the frostland. The researchers collected the soil and water samples to figure out how these craters were being formed.

Now, the research team has set up a new expedition to closely monitor these vents with the help of seismic monitors and surveillance equipment. The team has discovered a mound of soil-covered ice, which is even bigger than the 80m hole that was previously found. But, what’s more alarming is that this methane-filled vent can explode anytime.

The research team said that the rising temperature is instigating the warming underground methane pound to release gas up through the vent. According to the Siberian Times, the team has now warned that the methane escaping through these vents poses a potential threat to the “towns and cities in the extreme north, and natural gas exploration facilities.”

“We underestimate the danger that methane brings to us,” said Dr Igor Yeltsov of the institute. “I think that now it is premature to speak about some global catastrophe, as if it is a theory of ‘methane threat’, but if the warming continues at the same pace, our northern cities, located close to Yamal — such as Salekhard, Nadym, and Novy Urengoy — are in real danger.”