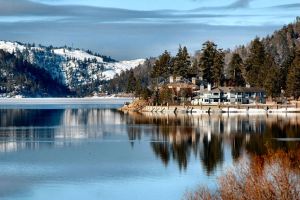 The USGS said the 4.0-magnitude tremor was centered near Big Bear Lake, which is about 100 miles east of Los Angeles. That’s near the location of the San Gorgonio Mountain Fault. It was originally measured at magnitude-4.5, but was revised about an hour later.

The USGS measured the quake at about seven miles under the surface.

The tremor hit just after 9 a.m. local time, which was during a presentation at the Southern California Earthquake Center’s annual meeting in Palm Springs. Geologist Brian Olson tweeted, “It was bound to happen someday.”

There were reports of weak to light shaking in nearby Yucaipa and Loma Linda. There were also reports as far away as Irvine, California. People said they woke up to their homes shaking.

There were no immediate reports of damage or injuries.

Although it’s not unheard of for people living in the region to feel quakes of this magnitude, it doesn’t happen every day. According to weather.com senior meteorologist Nick Wiltgen, the USGS database shows 105 other quakes of magnitude 4.0 or greater within 100 miles of Big Bear Lake since 2000. He says that works out to about seven per year.