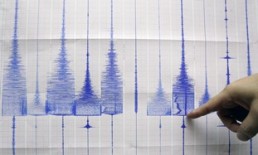 An earthquake measuring 4.2 on the Richter scale was felt throughout the country on Sunday. The epicenter of the tremor was 40 kilometers west of Binyamina.

The Coastal District Police Department stated that it received many calls from frightened citizens, mainly in the coastal region and Haifa. Magen David Adom in the Carmel Subdistrict also received many calls but they noted that there have been no reports of injuries or damages.

Director of the Seismology Division at the Geophysical Institute, Rami Hofstetter, said the earthquake was a rare occurrence both in potency and location.

“The area in which the quake took place this time is usually far less active, but this happens too, as we can see,” he said, adding that it had also been one of the most severe quakes of the past 20 years.

Hofstetter also believes it could be a warning sign. “A 4.2-level quake does not cause damage or casualties, but could sometimes, as occurred in Japan, mean the beginning of movement in the ground,” he explained.

Eran Agami felt the earthquake in Rehovot and said: “The entire house shook left and right. My parents in Elad felt it too.”
The last earthquake that was felt throughout Israel occurred last April. Israel’s Geophysical Institute said that the epicenter of the tremor was at sea at a depth of 60 kilometers and 800 kilometers off the Israel coastline. A Tsunami warning was issued for a few Greek Islands.