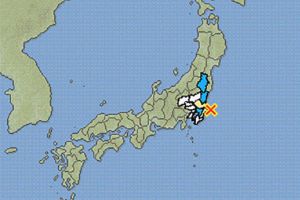 A MAJOR earthquake alert sent over the mobile phone system in Tokyo sparked panic in the Japan capital as local woke to the notification, but people are reporting they never felt the quake.

According to SNA Japan the tremor was a 4.6 magnitude earthquake off the coast of the Chiba Prefecture, but it was barely felt in Tokyo.

It is unclear why the emergency system was tripped, and the alert left millions of people started in Japan’s capital.

One person tweeted: “JESUS! My iPhone earthquake alert just boomed so loud I thought it was the third impact!!

“Fortunately earthquake didn’t seem to shake my area of Japan too much. But still, phone alert volume was definitely louder than usual.”

Another wrote: “Woken by a massive earthquake alarm on the phone.

“But seems we got no actual shaking in Tokyo.

“Unless we count the people nervously waiting for something to happen – then there’s probably a lot of shaking.”