4.8 Quake Strikes Off Victoria No Tsunami 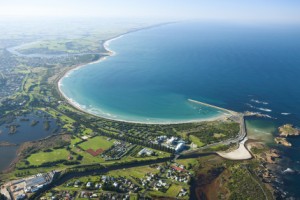 A magnitude-4.8 earthquake has been detected in waters off Victoria’s south-west coast, Geoscience Australia says.

It happened about 150 kilometres from the town of Warrnambool at 12:45pm and was also felt on King Island in Bass Strait.

The Bureau of Meteorology said no tsunami warning had been issued while Geoscience Australia said there were no reports of damage.

Seismologist Hugh Glanville said it was unlikely the tremor was triggered by a powerful quake that hit Chile just hours earlier.

“There is always a remote possibility that big earthquakes could trigger off smaller earthquakes in other parts of the world,” he said.

“If an earthquake was about to happen and then the shaking from a really big earthquake gave it a little push, that could push it over the edge, but it’s really hard to determine.

“Generally, they’re unrelated. Most likely this is just a coincidence.”

Mr Glanville said the area was known for small to medium-sized tremors and averaged about one or two a year.

“If this was onshore, you could often get damage within 10 or 20 kilometres of the epicentre. From this size [you’d get] cracks in buildings or plaster work … but because it was offshore, we don’t expect any damage.”

Ben Wilkie, a historian at Deakin University in Warrnambool, said the tremor made his office windows rattle.

“I was just sitting at my desk doing some work and I felt what felt like a very, very strong blast of wind,” he said.

“I saw that the windows were rattling, they rattled for a good three to four seconds and I also saw my desk shaking as well.

“I didn’t realise what it was until I saw that the Bureau of Meteorology had tweeted about it, and then I went and asked some staff members if they’d felt anything and they had, they just didn’t realise it was an earthquake either.

“We were thinking, what on Earth is that? We’re waiting for the aftershocks.”

“There was a fairly substantial rumble through the house, sort of like a shuddering in the floor and a little bit of noise in the framework of the house,” he said.

“I thought that’s unmistakable, that is definitely an earth tremor.