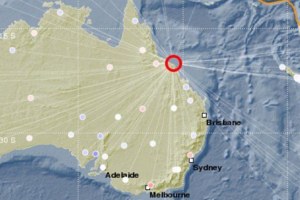 Homes and buildings shook and panicked holidaymakers scrambled as a ‘violent’ 5.8 magnitude earthquake rocked north Queensland and the Whitsundays.

Geoscience Australia detected the quake 50kms off the coast of Bowen, north Queensland, about 2.30pm.
It was the ‘biggest earthquake’ Queensland had seen in two decades, the agency’s seismologists said.
Hundreds of people were evacuated in Townsville and Cairns. Tremors were felt as far north as Hamilton Island and in the south, on the Sunshine Coast.

Witness accounts poured in, with many people reporting their first ever earthquake and some worrying about a tsunami.
But there were no reports of widespread damage or injuries.

ABC reporter Brigid Glanville tweeted: ‘On holidays on @HamiltonIsland grabbed kids ran outside as everything as an earthquake just hit’.
Martin Lee tweeted: ‘Earthquake! On the 9th floor in Cairns and the building was moving! I still can’t believe it! Bolted for the door.’

Workers and members at Bowen Golf Club – which is on the shoreline – feared a big wave was on its way.
Bowen Golf Club employee Margaret Need said: ‘It was only for a few seconds and we were more concerned about the ocean.’

‘If the ocean started sucking out we would have started running because we are right on the beachfront.
‘We just watched that for a bit to see if there was any change in the water.
‘The club shook violently and it was very scary.’

Others joked about the rare seismic event in a region more accustomed to tropical cyclones and heavy storms.
The Bureau of Meteorology said there is no tsunami threat to Australia.
Queensland Police said they had received a high volume of calls.
The agency asked people only call Triple Zero if they urgently need help.