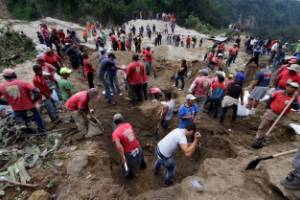 MEXICO CITY Frantic rescuers on Saturday dug in search of hundreds of people feared trapped beneath the rubble of a collapsed hillside that buried scores of homes in a suburb of Guatemala City.

Four more bodies were pulled from the mud in the morning, and the death toll had risen to 56 by the afternoon, an emergency official said at a news conference. Relatives have reported more than 100 people missing.

But with more than 100 homes buried, officials fear that as many as 600 people could have been buried when a hillside collapsed during a Thursday-night downpour in Santa Catarina Pinula, a town near the Guatemalan capital’s airport.

“We heard a great thunder clap,” a white-haired resident, Anita Pineda, told a videographer for Prensa Libre, Guatemala’s leading newspaper. “We thought it was the Day of Judgment and we begged God to help us.”

Video from the scene on Saturday showed rescuers clad in orange overalls digging with picks and shovels. They periodically halted their work and pressed ears to the ground hoping to hear signs of survivors. “Yell, so we can find you,” one rescue worker shouted into the ground.

Neighborhood resident Samuel Morales desperately dug where he believes his house stood before the killer mudslide, searching for his wife, two daughters and toddler. “A soldier said he had heard shouts,” a visibly distraught Mr. Morales told Prensa Libre. “That’s why I hope I will find them alive.”

Weakened by the loss of the tree roots that anchored it, the mountainside collapsed amid the heavy downpour the homes in the Cambray II neighborhood, built beneath a steep slope, officials said. Poor residents for years have built neighborhoods in hillsides and steep canyons of Guatemala City, often without legal permits or title to the property.

“We shouldn’t permit people to occupy this type of land,” Florentin Martinez, an urban planning expert at San Carlos University in Guatemala City told Prensa Libre television. “Land occupation should be orderly. People are living with extreme danger, but they don’t want to abandon their property.”

Such mudslides are common during the hurricane season in Central America and Southern Mexico.

A mudslide in 2013 buried a rural village near the Pacific Coast resort city of Acapulco, killing at least 400 people. A mountainside collapsed in Nicaragua during 1998’s Hurricane Mitch, claiming an estimated 2,000 lives. Another mudslide in 2005 killed hundreds of people in another Guatemalan village in 2005.