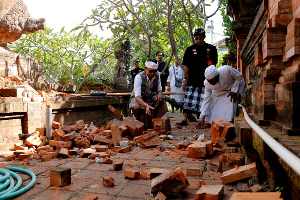 The undersea quake struck at 8am local time (1am UK time) off the coast of the Indonesian island.

There have been no reports of casualties, but one resident said people in the capital Denpasar ran out of homes and hotels in pyjamas after feeling the “strong” quake.

The epicentre was 102 km southwest of Denpasar and was 100 km deep, according to the European-Mediterranean Seismological Centre (EMSC).

Footage of the aftermath shows Denpasar’s Lokantha temple surrounded by smashed stonework, while other buildings across the southern side of Bali also suffered minor damage.

The quake was felt in other cities on the neighbouring islands of Lombok and Java, Indonesia’s meteorology and geophysics agency said in a statement.

A roof of a mosque in the city of Banyuwangi in East Java also partially collapsed, another photo from the disaster mitigation agency showed.

No tsunami warning has been issued by the Pacific Tsunami Warning Center or the Indonesian quake monitoring agency.