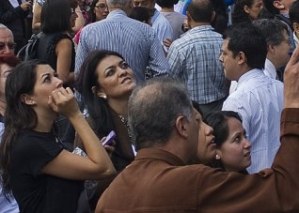 Officials said there were no immediate reports of serious damage or injuries from the quake, which had an initial magnitude of 6.3.

Office towers rocked back and forth for several seconds in the centre of Mexico City after the quake at 12:36 p.m. local time Monday afternoon and workers evacuated their buildings and gathered in the street. The quake was barely perceptible in some other parts of the city.

Mexico City Mayor Marcelo Ebrard said via Twitter that no major damage had been reported by helicopter overflights of the city and public transport and other services were functioning normally.

The U.S. Geological Survey says the earthquake, which had a preliminary magnitude of 6.3, struck about 158 kilometres southwest of Huajuapan de Leon, in Oaxaca, Mexico. (USGS)

Interior Secretary Alejandro Poire also said on Twitter that he had received no immediate reports of significant damage.

The U.S. Geological Survey reported a preliminary magnitude of 6.3 for Monday’s aftershock and said the epicentre was in southern Mexico near the border of Guerrero and Oaxaca states, very close to the epicentre of a strong quake on March 20.

Mexico has been shaken by a series of strong aftershocks since that quake, which killed at least two people and damaged about 13,500 homes near its epicentre.

Civil protection officials in both states close to the epicentre said there were no immediate reports of injuries or serious damage.

Last month’s quake was among the strongest in Mexico since an 8.1-magnitude temblor killed an estimated 10,000 people in Mexico City in 1985. A magnitude-8.0 quake near Manzanillo on Mexico’s central Pacific coast killed 51 people in 1995 and a magnitude-7.5 quake killed at least 20 people in the southern state of Oaxaca in 1999.