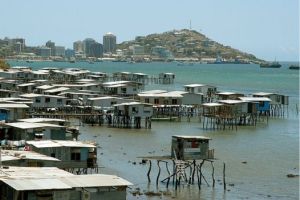 A magnitude-6.7 earthquake has struck off Papua New Guinea, officials say, but no Pacific-wide tsunami warning has been issued.

The tremor was estimated at a depth of close to 500 kilometres some 900 kilometres north-east of the capital Port Moresby, the United States Geological Survey said.

“Based on all available data, a destructive Pacific-wide tsunami is not expected,” the Hawaii-based Pacific Tsunami Warning Centre said.

“It’s only 10 to 20 kilometres off the coast but still it’s very deep, so it wouldn’t be anything extreme at all. No tsunami,” seismologist Jonathan Bathgate told AFP.

Quakes are common in Papua New Guinea, which sits on the Pacific’s Ring of Fire, a hotspot for seismic activity due to friction between tectonic plates.