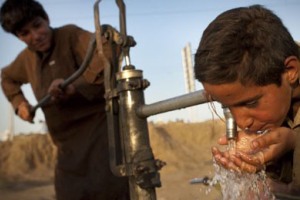 Minister for Science and Technology Rana Tanveer told the Senate on Tuesday that the Pakistan Council for Research in Water Resources (PCRWR) had conducted various water quality monitoring projects in the country and said 69 per cent to 82 per cent water samples collected from 2,807 villages in 24 districts were found contaminated or unsafe for drinking, Dawn online reported.

The PCRWR, which is a research and development organisation of the Ministry of Science and Technology, reported that major contamination was due to bacteria (coliforms), toxic metals (mainly arsenic), turbidity, total dissolved solids (TDS) and nitrate and fluoride pollution, Tanveer said.

Besides setting up 24 state-of-the-art water testing laboratories around the country, several other initiatives have also been undertaken. These included the development of microbiological testing kits, low-cost arsenic detection testing kits and production of chlorination and disinfection tablets.

However, bacteriological, arsenic and turbidity are the leading causes of contamination in the drinking water, Dawn online quoted Tanveer as saying.

While microbiological contamination remains one of the leading causes of cholera, diarrhoea, dysentery, hepatitis, typhoid etc., arsenic can cause various types of diabetes, skin, kidney, heart, black foot diseases, hypertension, birth defects and multiple types of cancer, according to the PCRWR.

A senior PCRWR official told Dawn online that the function of its laboratories were in jeopardy due to the lack of funds.

Set up at a cost of 1.2 billion Pakistani rupees (about $11 million), the labs were to identify contamination in drinking water and ensure the availability of potable water to the citizens.