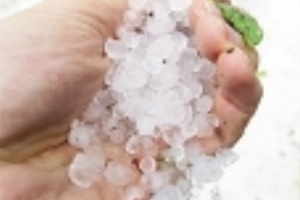 Air pollution hugely increases the size of hail, and thus the amount of damage it can cause to crops and property, according to a study presented at the European Conference on Severe Storms.
The interaction of man-made particles with airborne ice could also interfere with the way heat is distributed in the earth·s atmosphere, with possible consequences for climate change, one of the study·s authors told AFP.

Like tornados, hail is generated by small-scale storms that are difficult to track, and thus almost impossible to forecast. While they rarely last more than a few minutes, they can be devastating.

The most destructive European hail storm on record hit Munich, Germany in July 1984 with egg-sized rocks of ice, injuring hundreds and causing 1.5 billion euros (two billion dollars) in damage, according to German re-insurer Munich Re.

It lasted all of 20 minutes.

To see how pollution affects hail formation, researchers at The Hebrew University of Jerusalem ran a computer simulation of another, less severe storm that pelted Stuttgart, Germany last summer with a volley of hail the size of golf balls.

Because it is impossible to do controlled experiments in the atmosphere, explained Daniel Rosenfeld, numerical modelling was the only way to measure the varying impact of different densities of particle pollution.

“Clean air comes in from the ocean after a week or so with about 100 particles per cubic meter,” he said. “Most air over central Europe has more than 1,000, while over a very polluted city, the concentration is up to 10,000.”

Comparing the impact of 100 and 2,500 particles per cubic metre, he found that pristine air produced far less hail, especially when humidity was high.

It had been widely assumed that large hail formed inside updrafts, columns of air moving vertically through storms at speeds of 30 to 40 meters per second, giving the ice stones time to grow.

But observing an anomaly in the tropics in Brazil led Rosenfeld to speculate that the cause may lie elsewhere.

“We compared clouds that appeared in the smoke emanating from forest fires” — which generate large quantities of particle pollution — “to pristine clouds nearby,” he said.

The smoke-laden clouds produced hail over the rainforest, an “unheard of” phenomenon.

“The ice microphysical structure of clean and dirty clouds are dramatically different, especially when it come to hail,” said Rosenfeld.

The hail inside clouds formed in dirty air starts at higher levels and fall through the whole cloud, collecting droplets along the way.

The result are rock-like ice stones about 10 times the mass of hail formed in clean, pollution-free clouds. The kinetic energy — that is, the force of impact — of hail falling on the surface from dirty clouds was 30 to 50 times higher.

The findings could be useful to forecasters, Rosenfeld said, in regions where air pollution rates vary on a daily basis, especially nearer the coast.

The area around Trieste — where a couple hundred meteorologists are meeting this week to compare notes on severe weather — is subject to frequent hail storms, which cause severe damage to vineyards. Several European countries seed clouds in an attempt to prevent hail from falling.

Whether the impact of pollution on hail formation influences global warming is unknown, Rosenfeld said.

“But it is definitely relevant to the energetics of the climate system because the energy that is absorbed by the earth·s system from the sun uses mainly evaporating water,” he said.

“Climate change is not only about rising temperatures, it is also about changing the circulation systems, and the storm tracks and intensity, and the amount of precipitation.”