And The Seas Can Turn Into Blood 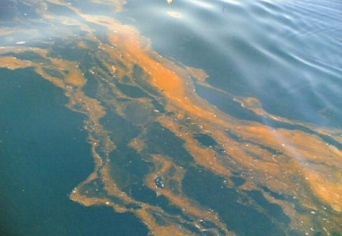 Once thought to be a problem plaguing only the coast, causing fisheries closures and wildlife deaths, the research shows that open sea algae populations also occasionally bloom into toxic soup.

The scientists found toxin-producing algae almost everywhere they looked within open regions of the Pacific. The scientists also detected domoic acid, the toxin that the algae produces. The toxicity exploded whenever iron was added to the water, producing a population boom.

“They grew like a fury,” said UCSC ocean scientist Mary Silver, who designed the research. “They are really responsive to iron.”

Algae blooms visible from the moon grew during previous studies fertilizing open ocean waters with iron. Kenneth Coale, director of the Moss Landing Marine Laboratories, led these studies in 1995 and 2002. The toxicity of the blooms could not be confirmed until more sensitive measures were invented.

Even up to 12 years later, algae toxin remained in the iron-enriched seawater samples Coale had in storage.

“It was always a nagging, gut feeling about domoic acid,” said Coale. “After teaming up with Mary Silver’s group, that nagging suspicion was confirmed.”

Since the algae consume the carbon dioxide, Coale’s research led to proposals to fertilize the ocean on a mass scale to stave off globalwarming. The discovery of the algae’s toxicity throws a wrench into these plans.

“We should use this as a caution,” said Silver. “Using iron fertilization as a remedy for global warming would be dangerous.”

Domoic acid attacks the nervous system. During blooms, the algae that produces it become a dominant food for small fish and shellfish. Animals higher up in the food chain amass poisonous amounts of the toxin because the algae lodges in the guts of their prey.

“With high algae levels, fish pick them up,” said Silver. “With their stomachs loaded with cells, they can be quite toxic.”

Harmful algae blooms occur seasonally along California’s coast, leading to a ban on shellfish harvesting between May and November to protect public health. In humans, the toxin attacks the brain, producing confusion, memory loss and hallucinations.

“They can’t forage; they can’t migrate. They get lost and re-strand themselves,” he said. “It’s pretty much the end of the line for them.”

Editor’s Note: We have known about this for several years and wrote about it including a scientific explanation in our publication The Global meltdown Domino Effect which you can download free at the bottom of this page.