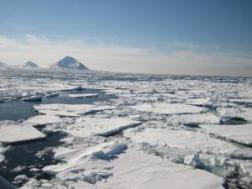 Two decades after the United Nations established the Framework Convention on Climate Change in order to “prevent dangerous anthropogenic interference with the climate system,” the Arctic shows the first signs of a dangerous climate change. A team of researchers led by CSIC assures so in an article recently published in Nature Climate Change.

These researchers assert that the Arctic is already suffering some of the effects that, according to The Intergovernmental Panel on Climate Change (IPCC), correspond with a “dangerous climate change.” Currently, the rate of climatic warming exceeds the rate of natural adaptation in arctic ecosystems. Furthermore, the Inuit (Eskimo) population is witnessing how their security, health and traditional cultural activities jeopardize.

The experts demand an effort in order to develop indicators that warn about these changes in good time, soften its causes, and re-enact the adaptation and recovery capacity of ecosystems and populations.

Carlos Duarte, CSIC researcher and author of the article, states: “We are facing the first clear evidence of a dangerous climate change. However, some of the researchers and some of the media are plunged into a semantic debate about whether the Arctic Sea-Ice has reached a tipping point or not. This all is distracting the attention on the need to develop indicators that warn about the proximity of abrupt changes in the future, as well as on the policymaking to prevent them.”

Tipping points are defined as critical points within a system, of which future condition may be qualitatively affected by small perturbations. On the other hand, tipping elements are defined as those components of the Earth system that may show tipping signs. According to the experts, the Arctic shows the largest concentration of potential tipping elements in Earth’s Climate System: Arctic Sea-Ice; Greenland Ice-Sheet; North Atlantic deep water formation regions; boreal forests; plankton communities; permafrost; and marine methane hydrates among others.

Duarte maintains: “Due to all of this, the Arctic region is particularly prone to show abrupt changes and transfer them to the Global Earth System. It is necessary to find rapid alarm signs, which warn us about the proximity of tipping points, for the development and deployment of adaptive strategies. This all would help to adopt more preventive policies.”

Effects on the Global Climate System

In another article, published in the latest number of AMBIO, Duarte and other CSIC researchers detail the tipping elements present in the Arctic. They also provide evidence to prove that many of these tipping elements have already entered into a dynamic of change that may become abrupt in most of the cases. According to the study, it is possible to observe numerous tipping elements that would impact on the Global Climate System if they were perturbed.

CSIC scientist explains: “In this work, we provide evidence showing that many of these tipping elements have already started up. We also identify which are the climate change thresholds that may accelerate the global climate change. The very human reaction to climate change in the Arctic (dominated by the increase of activities such as transportation, shipping, and resource exploitation) may contribute to accelerate the changes already happening.”

Scientists believe that nearly 40% of anthropogenic methane emissions could be lessen to a zero cost or even produce a net economic benefit. The experts assert: “In the large term, cutting the accumulative carbon dioxide emissions is essential to downshift the tipping elements such as the Greenland Ice-Sheet.” Both articles were written under the European funded project “Arctic Tipping Points.”