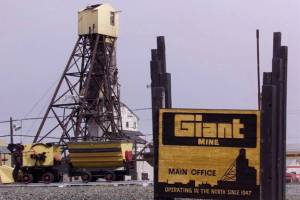 YELLOWKNIFE – A study of lakes near one of Canada’s most contaminated industrial sites suggests that the water immediately around Yellowknife’s Giant Mine won’t return to its natural state for generations – if ever.

The assessment comes despite a billion-dollar, taxpayer-funded plan to clean up thousands of tonnes of arsenic left by the shuttered gold mine on the outskirts of the Northwest Territories
capital.

Jules Blais of the University of Ottawa says analysis of a small lake on the edge of the mine lease shows important plants and insects have been wiped out by arsenic contamination.

He says those parts of the ecosystem will never return, although the mine cut arsenic emissions decades ago and stopped producing entirely in 1999.

Blais estimates that 20,000 tonnes of the potent toxin were deposited on the ground in the mine’s early years – enough to alter the environment indefinitely.