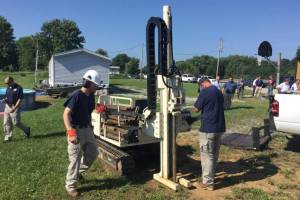 The sampling took place along Long Lane, a gravel road lined with mobile homes about five miles northwest of Mount Sterling. The sampling is being done at and near the site of a former wood-treatment company that closed decades ago.

Arsenic at 8 or 9 parts per million per kilogram occurs naturally in Kentucky soil and is considered safe, but Hughes said last week’s sampling showed numbers “in the hundreds, some in the thousands, and we had one spot that was at 10,000 parts per million.”

Kathleen Shearer, 68, who has lived on Long Lane for 15 years, said a spot near a lilac bush in her backyard tested at 1,500 parts per million.

“We’re all scared to death, and we don’t have any answers,” Shearer said.

Residents in the area were told last week to limit their time outdoors.

“Don’t let kids play in the dirt. If you do, just wash your hands,” Hughes said. “It’s not like volatile chemicals, where you have to worry about vapors and things like that.”

Over the next several days, the state will more thoroughly sample the residential area to determine “whether we have a huge, pervasive problem” or whether it’s confined to certain locations, Hughes said.

That will help determine what the state needs to do in removing the soil and where it could be disposed.

At some point, the state might want to remove soils. Depending on the size of the problem, that might include temporarily moving people from their homes, Hughes said.

The sampling also will help determine where the contaminated soil will go. Depending on the concentrations of arsenic, the soil might go to a Rumpke landfill in Montgomery County or to a hazardous waste landfill out of state, Hughes said.

Even if the state removes soil, Shearer questions that plan.

“How do we know they’re going to get it all?” she asked.

“Arsenic is not something we deal with on a daily basis,” Chamness said.

According to the federal Environmental Protection Agency, the non-cancer effects of arsenic can include thickening and discoloration of the skin, stomach pain, nausea, vomiting, diarrhea, numbness in hands and feet, partial paralysis and blindness.

Arsenic has been linked to cancer of the bladder, lungs, skin, kidney, nasal passages, liver and prostate.