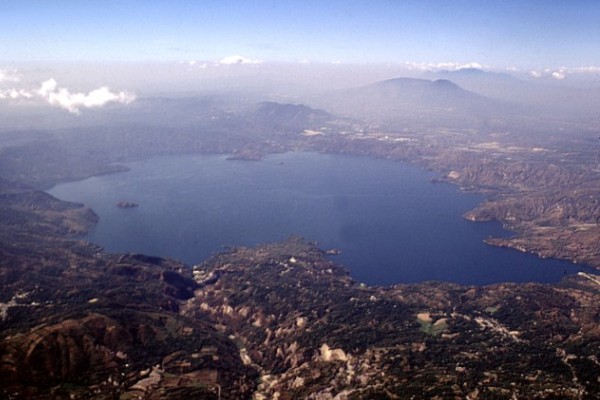 Volcanic lakes that are a primary source of freshwater to at least 4.5 million Latin American citizens have been found teeming with arsenic. The poisonous element leached into the water from sediment around the lakes.

Ohio University researcher Dina López has been investigating Lake Ilopango in El Salvador. It’s a six-mile-wide caldera with high concentrations of elements characteristic of volcanic systems, such as lithium, boron, and arsenic.

The freshwater from the lake is essential to life around the nation’s capital, San Salvador, where it is used for fish farms and drinking water. More than 200,000 residents live in the Lake Ilopango drainage basin, where arsenic concentrations range from 0.15 to 0.77 mg/L. The World Health Organization’s established guideline value for arsenic in safe drinking water is less than 0.01 mg/L.

López found that in areas where arsenic concentrations were high in the sediments it was low in the water, and vice-versa. The areas where arsenic was higher in the water were also more gaseous. López said she believes that as volcanic gasses dissolve in the water, they break down the sediments around the lake. Arsenic is then leached into the water. By determining which areas of the lake were near the most recent volcanic activity, she and other researchers can begin to manage the lake for commercial use.

“You don’t want to have the fish farms in the areas of the lake where you have the highest concentrations [of arsenic],” López said. She added that many fish farmed in Ilopango grow quickly, so they accumulate only small amounts of contaminants because of their short life cycle. These fish will decrease the bioaccumulation of arsenic and other harmful compounds in the area.

Arsenic has been shown to cause cancer, along with neurological and respiratory complications, when consumed in high amounts. Continued monitoring of the lake is imperative to ensure the area will continue to have potable water.

López collects water samples from the lake and sends them to a laboratory to determine element levels with atomic absorption equipment. Additionally to record the lake’s pH, temperature, dissolved oxygen, conductivity, and other parameters, she said she prefers to use multi-parameter YSI equipment because it is easier to transport between Athens, Ohio, and El Salvador.

“I always try to buy YSI because they have very robust equipment,” she said, noting she still has a functioning YSI dissolved oxygen meter from 16 years ago when she began her work at Ohio University.

López will return to El Salvador later this summer. Researchers there are now examining how to filter the water. Plans for a water treatment plant near the lake are in the works.

Arsenic is the 19th most prevalent element in the Earth’s crust. Problems with the element in drinking water are cropping up worldwide, with the most well-known case being in Bangledesh during the 1990s. López said the United States also has high arsenic in some areas, with levels as high as nine times the EPA recommended safe level.