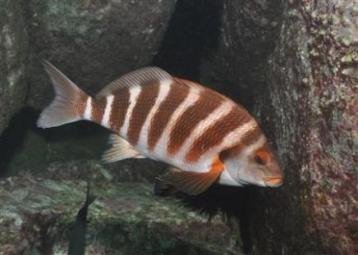 Rapidly warming ocean temperatures in some parts of the world could be pushing some fish species to the limit, stunting their growth, increasing stress and raising the risk of death, a study shows.

An Australian study, published on Monday in the journal Nature Climate Change, focused on the long-lived fish species called the banded morwong in the Tasman Sea, between Australia and New Zealand.

Scientists, using long-term and current data, found that the morwong’s growth in some areas has been slowed by a jump in sea surface temperatures of nearly 2 degrees Celsius over the past 60 years in the Tasman Sea, one of the most rapid increases in the southern hemisphere’s oceans.

The results have implications for other fish species, including commercial fisheries, as seas heat up and become more acidic, affecting coral reefs and multi-billion dollar fisheries dependent on them.

“By examining growth across a range that species inhabit, we found evidence of both slowing growth and increased physiological stress as higher temperatures impose a higher metabolic cost on fish at the warm edge of the range,” Thresher told Reuters from Hobart, Tasmania.

“A lot of commercial fish don’t move very much,” said Thresher, a co-author of the study with colleagues from the University of Tasmania’s Institute for Marine and Antarctic Studies.

“They tend to return to the same spawning grounds or they live on the same reefs. And those are the ones that are going to be most affected,” he said. This was particularly so for long-lived fish and those that live near the shore and at shallow depths. The banded morwong can live nearly 100 years.

Some species, though, such as tuna, are far more mobile and are moving further south into cooler waters.

Thresher and his colleagues used data on the morwong going back to 1910 that focused on bony structures called otoliths. These have annual growth rings that are similar to growth rings in trees.

Studying data from samples of the species in the Tasman Sea, they found increased growth for populations in the middle of the species’ range in Australian waters where temperatures have increased, but are still relatively cool.

But growth slowed with rising temperatures at the warmer northern edge of the range around New Zealand.

The scientists found that the drop in growth could be related to higher stress levels from rising temperatures, increased oxygen consumption and a drop in the ability to swim for long periods. (Reporting by David Fogarty; Editing by Robert Birsel)