Barbie Goes From Pink To Green 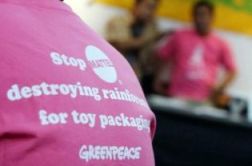 US toy giant Mattel, maker of the world-famous Barbie doll, has decided to use more environmentally friendly materials in its packaging after months of criticism from Greenpeace.

The California-based company said Wednesday it hopes to source 70 percent of its paper packaging from recycled material or sustainable fiber by the end of the year, with the goal rising to 85 percent by the end of 2015.

“We are committed to advancing the use of sustainably sourced paper and wood fiber across our business, beginning with packaging,” Mattel vice president Lisa Marie Bongiovanni said in a statement.

Greenpeace welcomed the move, which it said came after a three-month campaign to persuade Mattel to stop sourcing paper from Asia Pulp and Paper (APP), which the environmentalist group accused of destroying rainforests.

“They’ll no longer be wrapping their dolls and their toys in rainforest destruction … This is a huge win,” said Rolf Skar, a spokesman for the group, adding that the move would help protect tiger habitats in Indonesia.

The Indonesia-based APP says on its Web site that it is “committed to sustainable and socially responsible development.”

The Greenpeace campaign had featured a Barbie and Ken doll “break-up” on the popular micro-blogging Web site Twitter after the posting of a picture of Barbie destroying trees with a chainsaw.