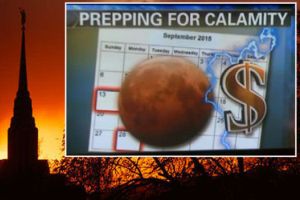 SHOPS in Salt Lake City are reportedly selling out of dried food, emergency supplies and equipment as residents fear the impending Blood Moon event will cause catastrophic earthquakes across US state Utah.

Local religious publications are reporting there is widespread panic in the highly religious area following months of online scaremongering that the world will end or face major devastation at the end of this month.

Christiantoday.com reported: “Many Mormons have expressed fears that a major earthquake will strike Utah on the night of the blood moon.

“Others reportedly anticipate a military invasion, technological disruptions and general chaos and hysteria.”

It quoted a local source as saying: “Mormons have traditionally been asked by the church to keep emergency supplies on hand, which come in handy in emergencies, but this run on supplies is because some people truly believe September 28 is the end.”

The website added: “Last week, reports emerged of Mormons stockpiling food ahead of the Blood Moon.”

Peggy Fletcher Stack of The Salt Lake Tribune reported: “Mixing a brew of biblical prophecies, the Hebrew calendar, a volatile economy, world politics, and astronomical occurrences, hordes of Utahns have become convinced calamitous events are imminent — maybe by month’s end — and are taking every precaution.

“They are called preppers and are buying up food-storage kits, flashlights, blankets and tents.

“Some are even bracing to leave their homes, if need be.”

One local shop which specialises in freeze-dried goods, reported a 500 per cent increase in sales over the past two months.

Ricardo Aranda, a customer-service representative said: “There is a sense of urgency, like something is up.

“A lot of people are mentioning things about September, like a financial collapse.”

“It’s crazy busy. (Our) 72-hour emergency kits are almost impossible to keep on the shelves. We get a shipment every day.”

Members of the Mormon Church of Jesus Christ of Latter Day Saints have feared the “end of days” since last year after author Julie Rowe published a series of books outlining doomsday visions she had during a 2004 near-death experience.

However, church elders moved to install calm, saying the mum-of-three’s claims were not in keeping with Mormon teachings.

Ms Rowe has given no firm date but has talked of the Blood Moon event during public speeches.

Nasa has called for people to dismiss the doommongers who claim the apocalypse will follow the last of four ‘Blood Moons’ which happen on September 28, and an asteroid strike before the second coming of Christ.

Blood Moons are rare lunar events, when a solar eclipse gives a full moon a reddish tinge. In a tetrad of Blood Moons there are also six full moons in between.

But this has not stopped an online panic setting in after claims were made over several months.

Nasa has insisted there is no substantial space rock scheduled to come anywhere near Earth for at least 100 years.

Redsky Says:</font color> A special message for anyone who believes it is the end on the 28th September. “We’ll see you on the 29th!”

In the mean time, to find out what is really going to happen and when, please download your free copy of The Global Meltdown Domino Effect from this website.