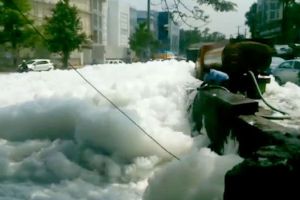 A HUGE wall of foam, which has been bursting into four foot flames has sparked panic in a busy city in India and left thousands puzzled.

Bellandur Lake, is one of the largest areas of water in Bangalore and now it has been shrouded in an enormous froth of white foam.

Locals even reported it catching fire and flaming as the suds accumulated suddenly broke out into flames as high as four-feet.

Elan Govan, 46, a resident who witnessed the unusual incident and shot it on his camera, said: “It has been nearly 15 years now that the lake is covered with the thick foam. And every time it rains, the froth raises, blowing it into the air and covers the commuters every time they cross the bridge over the lake.

“But in May this year, we witnessed the unexpected. The lake had suddenly caught fire and the flames went as high as four feet. It was a frightening sight. Residents were perplexed.

No one knew what would happen. It was an extremely dreadful moment.”

The lake, which sprawls across an area of 9000 acres near the city of Karnataka has been an area of natural beauty for the 61.5million residents but environmentalists are attempting to raise awareness over the foam.

Activists claims decades of untreated sewage and chemical waste disposed into the lake is the main cause of this unnatural phenomena.

Mr Govan, an IT entrepreneur and a member of Whitefield Rising, a community welfare society, is working with a bunch of young volunteers to clean the lake.

He added: “We believe the combustion mainly happened because methane had built up due to the accumulated froth on the top layer of the lake that contains effluents like grease, oil, and detergents.

“Bangalore was once hailed as the ‘City of Thousand Lakes’ but now the condition of these lakes is pitiable. The lake is filled with sewage sludge and becoming a problem for the environment and the foam is affecting those who come into contact,” said Govan, adding a volunteer had almost lost vision after foam entered into his eyes.

Bellandur receives over 130 million gallons of untreated or partially treated sewage from homes and industries all over the city per day and the local Municipal Corporation say the situation can improve only after 2017 when new sewage and drainage system are planned and built in the city.