California Droughts To Get Worse 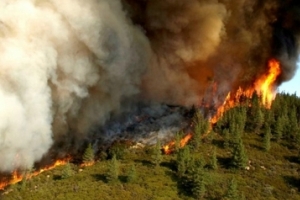 California is now well into its fourth consecutive year of drought. This is not without consequences. Tensions in the state have mounted as urban and agricultural water users become increasingly stressed by water shortages — but we can’t blame the almond farmers.

There are many factors at play here, notably a complex water cycle and conveyance network, as well as a somewhat archaic legal landscape. One thing that all Californians can agree upon is that we need to find solutions, because the drought is affecting livelihoods and the environment in a serious way.

Climate change has likely played a pivotal role in exacerbating the California drought. A team of Stanford researchers have shown that one driver for this is a persistent region of high atmospheric pressure off the state’s coast, keeping storms and rainfall away from land. These conditions are much more likely to occur with the high greenhouse gas concentrations that we are experiencing today. In exploring climate model projections, it appears that the situation will get worse.

Raw data for a raw landscape

From the data, three alarming conclusions emerge:
• Temperatures in California are expected to rise on average by 7 degrees Fahrenheit (4 degrees Celsius) by 2080.
• Rainfall at that time will plummet between 2 to 16 percent below current levels.
• All of these lands will be exposed to varying degrees of impacts.

Combined, those changes will have a devastating effect on cities, crops and ranching operations across the state.

Most critically affected are lands essential to our food security, yet which also require the most water: croplands.

Most of California’s croplands are located in the farm-rich Central Valley, a geographic area that the models project will likely be exposed to increasingly severe climate impacts over the next six decades. [Building a Drought-Proof Farm (Op-Ed )]

Temperatures will range between 6.5 to 7.5 F (3.6 to 3.8 degrees Celsius) higher, and rainfall may decline between 6 to 14 percent in major farmland areas, harming food production and environmental integrity in a region that produces nearly half of all vegetables, fruits and nuts consumed in the United States.

Rangelands: A variety of outcomes in a warmer climate

Cattle farming and dairy production are California’s largest agricultural exports, according to the U.S. Department of Agriculture. Ranches and healthy pastures for grazing are essential to those operations.

My analysis suggests rangelands will experience a wider range of impacts than croplands — this stands to reason, as these grasslands are more widely distributed across the state, covering a large area and a diverse array of biomes.

Finally, we turn to California’s urban areas. As significant water users, settlements throughout the state could be affected even more severely than croplands, with larger cities such as Los Angeles and San Diego located in regions where average annual rainfall may drop by as much as 14 percent by 2080.