Climate Catastophe: No City Is Safe 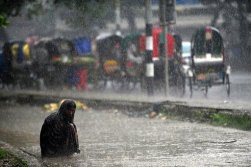 A third of humanity, mostly in Africa and South Asia, face the biggest risks from climate change but rich nations in northern Europe will be least exposed, according to a report released Wednesday.

Bangladesh, India and the Democratic Republic of Congo (DRC) are among 30 countries with “extreme” exposure to climate shift, according to a ranking of 193 nations by Maplecroft, a British firm specialising in risk analysis.

Maplecroft’s tool, the Climate Change Vulnerability Index (CCVI), looks at exposure to extreme weather events such as drought, cyclones, wildfires and storm surges, which translate into water stress, loss of crops and land lost to the sea.

How vulnerable a society is to these events is also measured, along with a country’s potential to adapt to future climate change-related hazards.

Of 30 nations identified in the new report as at “extreme” risk from climate change, two-thirds are in Africa and all are developing countries.

Africa is especially exposed to drought, severe flooding and wildfires, the report says.

“Many countries there are particularly vulnerable to even relatively low exposure to climate events,” said Charlie Beldon, co-author of the study.

At the other end of the spectrum, Iceland, Finland, Ireland, Sweden and Estonia top the list of nations deemed to be least at risk.

With the exception of Israel and oil-rich Qatar and Bahrain, the 20 least vulnerable countries are in northern and central Europe.

China and the United States — the world’s No. 1 and No. 2 carbon emitters — are in the “medium” and “low” risk categories, respectively.

In a parallel analysis of major cities at risk, Maplecroft pointed to Dhaka, Addis Ababa, Manila, Calcutta and the Bangladesh city of Chittagong as being most exposed.

Three other Indian metropolitan areas — Chennai, Mumbai and New Delhi — were listed as being at “high” risk.

“Vulnerability to climate change has the potential to undermine future development, particularly in India,” Beldon observed.

Recent studies — reviewed in a special report by the UN’s Intergovernmental Panel on Climate Change (IPCC), due out next month — point to strengthening evidence of links between global warming and extreme weather events.

Record droughts in Australia and Africa, floods in Pakistan and central America, and fires in Russia and the United States may all be fuelled in part by climate change, some experts say.