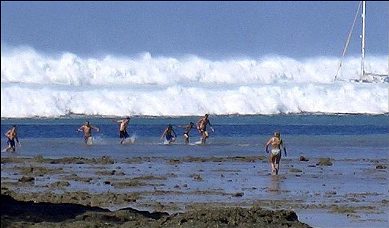 From tsunamis in Britain to huge avalanches in the Alps and volcanic eruptions in Germany, some of the world’s top geologists are warning these potential natural catastrophes could become reality, if global temperatures continue to rise.

At a three-day conference starting today at University College London (UCL), scientists will show how alterations in the earth’s crust could trigger unexpected events.

They say evidence from the past reveals that times of dramatic climatic change are characterised by heightened geological activity.

For example, 10,000 years ago at the end of the last ice age, melting ice and rising sea levels triggered a significant rise in volcanic activity.

He told Sky News Online: “Climate change is very doom and gloom I’m afraid and it’s one of those problems that the closer we look at it the worst it seems to get.

“If you want some faint glint of good news from this I suppose that if we see a big volcanic response, the gases pumped into the atmosphere will cool things down at least temporarily, but that’s not recommended.

“We need to be cutting emissions, not waiting for all the volcanoes on the planet to erupt.”

As the Arctic ice melts, geologists are particularly concerned that the planet’s deposits of methane – a greenhouse gas 25 times more powerful than carbon dioxide – are stored underneath the permafrost.

As the ice melts, a build-up of methane hydrates in the atmosphere would accelerate the process of climate change.

Other experts warn that disintegrating glaciers could cause earthquakes, triggering tsunamis off Chile, New Zealand and Canada, perhaps even sending one across the Atlantic capable of reaching British shores.

Professor David Tappin of the British Geological Survey said: “If the temperatures warm and the oceans warm then the hydrates at the sea bed will melt.

“They will melt catastrophically and in so doing they’ll be forced into the atmosphere but also, they will create submarine landslides which could trigger a tsunami.”

The geological conference is the latest in a series of scientific gatherings organised in the run up to the UN’s climate change conference in Copenhagen in December.

More evidence, many climate experts now believe, for the international community to reach a strong global emissions reduction agreement sooner rather than later.

Editor’s Note: We first reported the possibility of a tsunami hitting the UK in 2006. We have today emailed a copy of the recently updated Global Meltdown Domino Effect to Professor Bill McGuire. To get your free copy click on the image at the top of the right side bar.</font color>