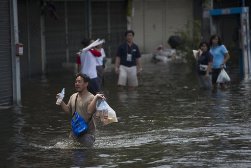 In a statement issued at a meeting in London, they urged tougher action to reduce climate change including upping the EU target for cutting greenhouse gas emissions from 20 percent by 2020 to 30 percent from 1990 levels.

“It is not enough for politicians to deal with climate change as some abstract academic concept,” said a signatory, Hugh Montgomery, director of the University College London (UCL) Institute for Human Health and Performance.

“The price of complacency will be paid in human lives and suffering, and all will be affected.

“Tackling climate change can avoid this, while related lifestyle changes independently produce significant health benefits. It is time we saw true leadership from those who would profess to take such a role.”

Other signatories include Michael Jay, the chairman of medical charity Merlin, Ian Gilmore, ex-president of the Royal College of Physicians, and Anthony Costello, director of the UCL Institute for Global Health.

The statement outlines how rising temperatures and weather instability will lead to more frequent and extreme weather events, increasing the spread of infectious diseases, destroying habitats and causing water and food shortages.

This could trigger conflict, humanitarian crisis and mass migration, it says.

Taking swift action to tackle climate change could not only reduce these risks but also improve global health, the experts say, citing moves to phase out coal-fired power stations which would improve air quality.

The experts urge the EU and other developed countries to adopt tougher emissions targets, and developing countries to identify the ways climate change threatens health and seek ways of mitigating or adapting to these.