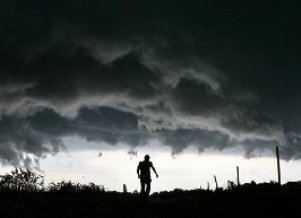 In its first-ever report on the question, the Nobel-winning Intergovernmental Panel on Climate Change (IPCC) said man-made global-warming gases are already affecting some types of extreme weather.

And, despite gaps in knowledge, weather events once deemed a freak are likely to become more frequent or more vicious, inflicting a potentially high toll in deaths, economic damage and misery, it said.

Many defence options are of the “no regret” type, meaning they are relatively low-cost but effective, he said.

“Reducing disaster risk should be a priority in every country,” said Chris Field, a US scientist who was one of the 592-page report’s lead authors.

A summary of the report was approved last November. The full document was published on Wednesday ahead of a worldwide campaign to advise governments, policymakers and grassroots groups.

The report made these points:

— Since the 1950s, record-breaking daily temperatures and heatwaves have become more frequent or lasted longer, according to strong evidence. There is a 90-100 percent probability that this will continue through the 21st century.

“The hottest day, which today occurs once every 20 years, is expected to occur once every second year by the end of the 21st century,” said climate physicist Thomas Stocker.

This scenario is based on the assumption that today’s high emissions of greenhouse gases continue unabated, he explained.

— Extreme rainstorms have intensified over past decades and are likely to become more frequent in this century, although with big differences between regions.

— Whether hurricanes or typhoons have changed in intensity, frequency and duration over the past 40 years is hard to gauge. But warmer seas suggests these storms will pack a higher wind speed, yet may also become less frequent.

“But the report does point out areas that are particularly vulnerable, and that does include large cities, particularly in developing countries, coastal areas, it includes small island states, and it includes much of the world that is chronically short of water resources.”

The report pointed in particular at coastal megacities.

A rise of 50 centimetres (20 inches) in sea level would make much of the coastal and low-lying areas of Mumbai — inhabited in particular by slumdwellers — uninhabitable.

The panel stressed that it had exhaustively collected information, checked it and consulted with experts working outside the forum.

The report was drawn up by 220 scientists and economists from 62 countries, who pored over thousands of published studies. Their draft was then submitted to external review by experts and governments, drawing nearly 19,000 comments in three rounds of consultation.

The IPCC was criticised for closed mentalities and lacking transparency after several mistakes were found in its 2007 Fourth Assessment Report.

Climate sceptics seized on the errors. They accused the panel of distorting data in order, in their view, to invent a problem.

The report — Managing the Risks of Extreme Events and Disasters to Advance Climate Change Adaptation — acknowledges shades of uncertainty.

For storms, for instance, longer-term data is needed to say whether they have already become more frequent or intense, said Stocker. Another variable is how effective countries will be in curbing the carbon gases that cause the problem, he said.