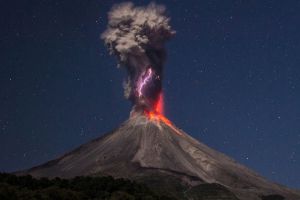 The Colima volcano in Western Mexico continued releasing large columns of ash and smoke on Tuesday.

On Monday night the volcano spewed lava around its crater and released a column of smoke.

Authorities told local media the activity was considered “normal” and the volcano had not increased its activity.

They also warned that small amounts of ash could fall in surrounding communities.