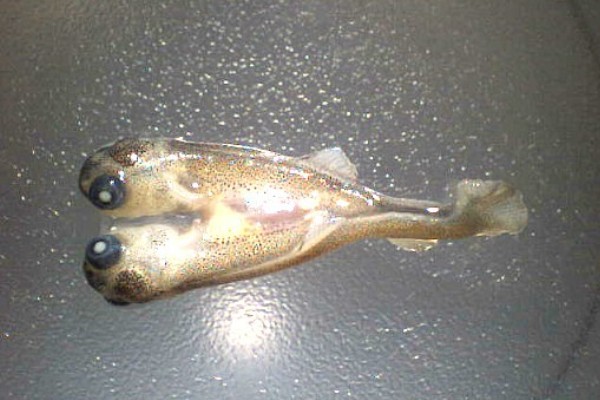 Toxic chemical contamination was the likely cause of fatal fish mutations in northern Australia in which thousands of bass larvae spawned with two heads, an expert said Wednesday.

Matt Landos, an aquatic animal specialist and member of the Australian College of Veterinarian Scientists, said the mutant larvae at a Noosa River fish farm survived just 48 hours and were dying en masse.

“When we used the water on-site or have taken bass from the Noosa River those fish appear to have been contaminated and they give rise to deformed or convulsing larvae,” he told AFP.

“I have been working in aquaculture for 10 years and this is the first time I have ever seen anything like it.”

Tests had excluded the presence of a virus or bacteria, leading Landos to suspect that pesticides from a neighbouring macadamia nut farm were to blame.

“It leaves us sitting with toxic chemical contamination as a likely cause,” he said. “I believe that it’s some of these chemicals at very low levels that are impacting on the breeding ability of these fish.”

Deformities in the fish had increased as the neighbouring macadamia nut plantation had expanded in the past two years to virtually border the hatchery on three sides, said Landos.

Chickens, horses and sheep at the hatchery were also experiencing birth defects and foetal deaths at abnormally high rates, he said.

The organophosphates in question — carbendazim and endosulfan — had been recognised as potentially dangerous and even banned in some countries, but were still recommended for use in Australia, said Landos.

The Queensland state government said tests gave no indication that the macadamia farm was using the chemicals against the manufacturers’ instructions.

The local fisheries department is investigating, and expects to receive results from tests of dead fish specimens next month.