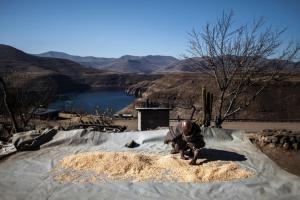 Lesotho is experiencing food insecurity as a result of drought despite being the site of the second largest dam in Africa, because water is being exported to its neighbour South Africa.

An estimated 680,000 people — more than a quarter of the total population – are in need of emergency food and assistance, according to the World Food Programme (WFP).

Crops are failing in the landlocked region because of erratic rainfall linked to the El Nino weather system, which has plunged swathes or eastern and southern Africa into drought. But farmers say that if they could irrigate crops with water from the vast Katse Dam they could increase their yield.

Mr Molise’s total annual harvest for 2016 filled just two large sacks, in place of the usual dozen. According WFP, the 2016 harvest for Lesotho’s primary crop maize is less than a third of what it was last year.

While depleted, the Katse Dam is still at more than half its normal water level, meaning that many farmers are watching their crops shrivel and die against the backdrop of an expansive lake.

“The level today is about 63.4 percent, which is quite low,” Tatuku Maseatile, Katse acting branch manager for the Lesotho Highlands Development Authority, told AFP. “[But] we are still able to meet our annual targets in terms of both [electricity] generation and water transfer.”

When the Katse Dam was built in the nineties, Lesotho was dubbed the ‘Water Castle’ for South Africa, which surrounds it on all sides. It was negotiated that the dam would supply Lesotho with hydroelectricity, and the cities of Pretoria and Johannesburg in South Africa with water.

But Lesothian farmers said they have struggled to make a living since their land was flooded.

“There were fields around the river before the dam was built, and there were trees, but they are covered by water,” said Mr Molise.

“Since the dam is here, it’s difficult to get water. The crops are very poor, even the grazing land. It’s like a desert.”