Earth Is Heating Up Faster Than Ever 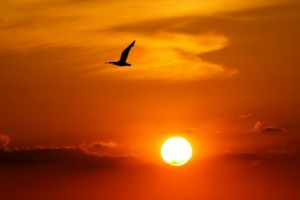 According to experts at NASA, global warming is seriously impacting planet Earth; in fact, NASA’s top climate scientist has gone on the record to say that currently, Earth is warming at a faster pace that the planet has seen in at least 1,000 years.

The impact of this record-shattering climate change and global warming indicates that, at least according to NASA, it’s highly unlikely that world leaders will be able to keep the Earth’s temperature within the agreed upon limit set only a year ago.

Indeed, while global warming and man-made climate change have been impacting Earth’s temperature for years and even decades, the current pace is something that the planet hasn’t seen in roughly a thousand years. NASA cientists have come to this global warming determination not only by utilizing accumulated records (which have only been being kept since the late 1800’s) but by using other, perhaps more reliable, methods as well.

According to NASA, planet earth has ways of keeping track of global temperatures, weather patterns, and environmental changes like widespread global warming that are far beyond what humans have been able to devise. As The Guardian reports, in order to get a grasp on global temperatures over the last thousand years and how they related to temperatures today, NASA researchers have analyzed sediments and ice cores.

The result? A discovery that the current trend of global warming, particularly over the past few decades, is much more extreme and drastic than anything that has occurred on planet Earth over the last 1,000 years.

That finding was punctuated by the fact that global warming and climate change experts at NASA and elsewhere have determined that this July was the hottest month ever recorded in the modern era. That is considered to be the time from when modern records began to be kept, or 1880.

On top of that disturbing global warming tidbit via NASA, the space agency also reported that since October 2015, each subsequent month has set a new global warming for the highest temperature ever recorded.

At the Paris climate accord in 2015, world leaders agreed to take measures to attempt to curtail global warming. It was agreed to be imperative to keep the global temperature average at no more than 1.5C higher than they were in the 19th century. Perhaps tragically, global warming has already forced global temperatures to 1.38C higher than the 19th century, on average.

“In the last 30 years we’ve really moved into exceptional territory. It’s unprecedented in 1,000 years. There’s no period that has the trend seen in the 20th century in terms of the inclination (of temperatures) Maintaining temperatures below the 1.5C guardrail requires significant and very rapid cuts in carbon dioxide emissions or co-ordinated geo-engineering. That is very unlikely. We are not even yet making emissions cuts commensurate with keeping warming below 2C.”

According to NASA scientists and others specializing in the subjects of climate change and global warming, current rates of temperature increase on planet Earth are almost certainly human caused and the result of unfettered carbon emissions.

The global warming problem facing the planet is getting exponentially worse and has become self-perpetuating. The rise in average global temperatures over recent decades has caused polar ice caps to shrink. As the glaciers and permafrost thaw, they release trapped greenhouse gasses that accelerate the warming process.

Already, sea levels are beginning to rise, and some NASA scientists believe that the trend of rising waters could mean that global sea levels rise by 3 feet as soon as the end of this century. Perhaps even sooner.

The unprecedented rate of global warming also seems to be playing a large role in the current mass extinction taking place on planet Earth. Scientists are calling it the planet’s sixth mass extinction, and it’s wiping out species at a rate not seen in tens of thousands of years.

NASA says that in the past, global warming took place at a rate of about 4-7C in a roughly 5,000-year period. And as the global climate recovered from ice ages, at that. This century, the rate of global warming is nearly 10 times higher.