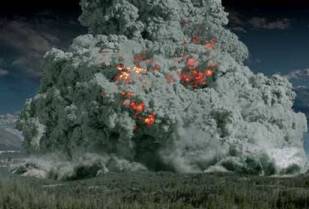 The swarm of more than 500 tremors is the largest series of back-to-back quakes to hit the area in years, according to scientists and follows recent quakes on the heels of a series of tremors earlier in January.

“The December 2008 earthquake sequence is the most intense in this area for some years,” said the Yellowstone Volcano Observatory. “No damage has been reported within Yellowstone National Park, nor would any be expected from earthquakes of this size.”

Professor Robert B. Smith, a geophysicist at the University of Utah and one of the leading experts on earthquake and volcanic activity at Yellowstone, said that the swarm is of keen interest to scientists.
“It’s not business as usual,” said Smith. “This is a large earthquake swarm, and we’ve recorded several hundred. We are paying careful attention. This is an important sequence.”
Smith noted that beginning in 2004, there was “accelerated uplift of the Yellowstone Caldera” that covered the entire caldera.

In 2007, Smith and his University of Utah colleagues said the current rise in the caldera was “unprecedented” but concluded that because there were no major earthquakes or “earthquake swarms” accompanying the uplift, they found “little indication that the volcano is moving toward an eruption.”
The last major earthquake swarm was in 1985 and lasted three months, Smith told The Denver Post.
The Yellowstone Plateau, which comprises Yellowstone National Park, is one of the largest super-volcanoes in the world and has gone through three volcanic cycles spanning two million years that included some of the world’s largest-known eruptions.

Through 5 p.m. Dec. 31, the swarm had included 12 events of magnitude 3.0 to 3.9 and approximately 20 of 2.5 to 2.9, with a total of 400 quakes large enough to be located.
The observatory said similar swarms have occurred in the past without triggering steam explosions or volcanic activity. However, the observatory said there is some potential for explosions and that earthquakes may continue and increase in intensity.

Joe Moore, director of the Wyoming Office of Homeland Security, said his office is tracking the events at Yellowstone on a minute-by-minute basis.
“It’s being followed very closely,” said Moore.
He said his office has evaluated the emergency plans — which includes evacuations — developed by Teton County, where Jackson Hole is located, and Park County, where Cody is located.
Should a destructive earthquake or volcanic explosion occur, he said his agency would assist those counties as well as communities in Fremont County, which includes the Wind River Indian Reservation.
He said the Federal Emergency Management Agency in Denver is closely monitoring the seismic activity in Yellowstone.

“They are following it as much as we are,” said Moore. “There has been an outstanding exchange of information” between local, state and federal agencies, he said.
Yellowstone is the site of the largest and most diverse collection of natural thermal features in the world.
The most devastating earthquake in recent history in the Yellowstone region occurred on Aug. 17, 1959, when a magnitude 7.1 earthquake hit. It was centered near Hebgen Lake, Mont., killed 28 people and caused more than $11 million in damage. Geysers in ellowstone National park changed eruption times, and new ones began to erupt. On June 30, 1975, a magnitude 6.4 tremor hit the park.