Earthquakes continue to rumble at Yellowstone 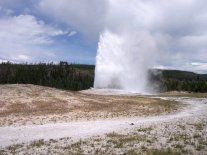 GOLDEN – For three weeks, 9NEWS has been telling you about earthquakes under Yellowstone National Park.

It is one of the most intense quake swarms ever recorded in the park’s history and it still shows no sign of slowing down.

In fact, the activity increased during a six-hour period last night. During that time, two quakes, both nearly magnitude 3’s happened within a few minutes of each other.

Since the quake swarm started on Jan. 17, there have been more than 1,700 tremors recorded by the U.S. Geological Survey in Golden.

Yellowstone is the site of at least three super volcanic eruptions.
Experts say they have seen no data so far to indicate the magma under the park is moving or getting ready to erupt.