Euphrates to dry up by Christmas 2025 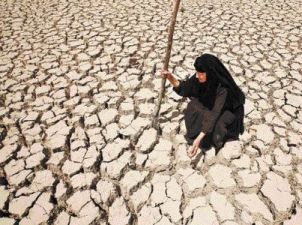 In 2007, Redsky published an article based on an Environment Protection Agency (E.P.A.) report which had predicted the Euphrates could dry up by 2025.

Here is an update:

The Euphrates River is drying up. Strangled by water policies of Iraq’s neighbours, Turkey and Syria, a two-year drought and years of misuse by Iraq and its farmers, the river is significantly smaller than it was just a few years ago. Officials worry it could soon be half what it is now.

The shrinking of the Euphrates, a river so crucial to the birth of civilization that the Book of Revelation prophesied its drying up as a sign of the end times, has devastated farms along its banks, has left fishermen impoverished and has depleted riverside towns as farmers flee to the cities, looking for work.
It is a crisis that threatens the roots of Iraq’s identity, not only as the land between two rivers, but as a nation that was once the largest exporter of dates in the world, that once supplied German beer with barley and that takes patriotic pride in its expensive Anbar rice.

Now Iraq is importing more and more grain. Farmers along the Euphrates say, with anger and despair, they may have to abandon Anbar rice for cheaper varieties.
Droughts are not rare in Iraq. But drought is only part of what is choking the Euphrates and its larger, healthier twin, the Tigris.
The most frequently cited culprits are the Turkish and Syrian governments. Iraq has plenty of water, but it is a downstream country. There are at least seven dams on the Euphrates in Turkey and Syria, according to Iraqi water officials, and with no treaties or agreements, the Iraqi government is reduced to begging its neighbours for water.
But many U.S., Turkish and even Iraqi officials say the real problem is Iraq’s own water management.
Leaky canals and wasteful irrigation squander the water; poor drainage leaves fields so salty from evaporated water that women and children dredge huge white mounds from sitting pools of run-off.