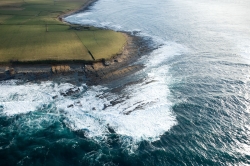 Europe’s seas are changing at an unprecedented rate as ice sheets melt, temperatures rise and marine life migrates due to climate change, a report by the Climate Change and European Marine Ecosystem Research (CLAMER) project warned.

Scientists examined a mass of EU-funded research on the impacts of climate change on Europe’s marine environment and identified the gaps and priorities for future work.

“Change has been clearly visible and is much more rapid than we thought was possible,” Carlo Heip, chair of the CLAMER project and lead author of the report, told Reuters on Tuesday.

Over the past 25 years, sea water temperatures have increased as Arctic sea ice has melted. The combination of rising sea-levels and increased winds has contributed to the erosion of 15 percent of European coasts, the report said.

Warming has speeded up in the past 25 years at around 10 times faster than the average rate of increase in the 20th century, it added.

From 1986 to 2006, sea surface temperature rises for European waters were three to six times higher than the global average.

“Scenario simulations suggest that by the end of the 21st century, the temperature of the Baltic Sea may have increased by 2 to 4 degrees centigrade, the North Sea by 1.7 degrees, and the Bay of Biscay by 1.5 to 5 degrees,” the report said.

Melting ice sheets and glaciers add more uncertainty. Current estimates for 2100 suggest European sea levels could rise 60 cms and up to 1.9 metres at some British coasts.

Sea level rise threatens populations in all low-lying areas of Europe, but countries such as Britain, France and the Netherlands could be less vulnerable because they are rich enough to adopt coastal protection measures.

Changes in the marine food chain have also occurred as organisms have migrated to the Atlantic from the Pacific via seasonal ice-free passages through the Arctic.

While some species can thrive in other oceans, any major upheaval to the marine ecosystem could have devastating effects, the report said.

CLAMER also found that some bacteria strains were becoming more prevalent and could be a potential threat to human health. For example, cholera strains have increased in the North Sea over the past 50 years, perhaps due to temperature change.

Among its many recommendations, CLAMER urged more study of sea-level changes due to ice sheets breaking up or melting, coastal erosion, temperature changes, ocean acidification, marine ecosystems and circulation changes.

“The main message is we need to keep our fingers on the pulse,” said Heip.