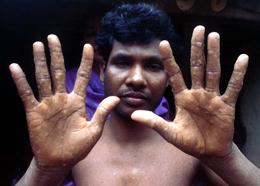 More than a quarter of drinking wells in Vietnam’s densely-populated Red River delta contain unsafe levels of arsenic that can cause cancer, neurological problems and hypertension, researchers warned on Tuesday.

In a paper published in the journal Proceedings of the National Academy of Sciences, they also said 44 percent of the wells in the delta carried levels of manganese that exceed World Health Organization guidelines.

“About 7 million people are at a considerable risk of chronic arsenic poisoning. This is particularly worrying because groundwater is the main source of drinking water throughout the delta,” lead author Michael Berg wrote in an email to Reuters.

Manganese can disrupt the development of growing children.

Home to 16.6 million people, the delta straddles eight provinces and two municipalities, the capital Hanoi and Hai Phong port. Eleven million people have no access to the public water supply and are dependent on other sources, such as tubewells.

Experts have long known that groundwater in parts of southeast Asia contain unsafe levels of arsenic, a naturally occurring chemical, but their locations have never been clear.

Berg, a senior scientist at the Swiss Federal Institute of Aquatic Science and Technology, and colleagues collected samples from 512 private wells across the delta and analyzed them for arsenic, manganese and other toxins such as selenium and barium.

“The most health threatening … are arsenic, where 27 percent of the wells (are) above WHO guidelines and manganese, 44 percent.”

Berg and colleagues believe the widespread contamination is due to a long history of groundwater exploitation in the delta.

“The practice … has caused arsenic to leech downward and taint the municipal water supply,” they wrote, urging households to use sand filters and other water treatment methods.

According to the WHO, water containing more than 10 micrograms of arsenic per liter is unsafe, and chronic poisoning leads to accumulations in the skin, hair, and nails, resulting in skin pigmentation, hypertension and neurological dysfunctions. It may also cause cancer in the skin, lungs, bladder and kidney.