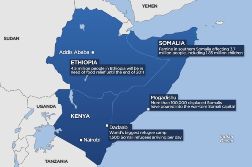 Humanitarian officials say the scale of the humanitarian crisis in the Horn of Africa is still huge three months after famine was declared in the region.

They say the response from the international community has been strong, but local factors are still hampering relief efforts.

In Somalia alone, Mr Mitchell points out more than 400,000 children remain at risk of death and the coming of the rains increases the threat of disease sweeping through overcrowded camps for refugees and the displaced.

The greatest challenge continues to be reaching those in need inside the parts of Somalia worst affected by conflict where famine was first declared in July.

As a measure of the challenge the number of Somali refugees crossing into south-eastern Ethiopia has been steadily rising again.

“We are now facing the wave of health problems with the measles epidemic not yet contained,” she said.

“And now with the rains there’re more cases of diarrhoea, malaria, and dengue fever.

“When a kid is malnourished, even the slightest health problem can kill it.”