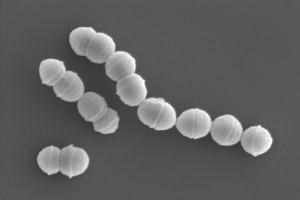 The infection, which is fatal in almost one in three cases, destroys tissue and can result in death in a matter of days.

The figures show that cases this year topped last year’s 273 patients in less than nine months.

“Researchers are not sure why the number is growing,” said an official at NIID’s Infectious Disease Surveillance Center. “There is so much we still don’t know about this disease.”

When a person is infected with streptococcal bacteria, he or she will normally develop only minor symptoms such as a sore throat or skin infection.

The bacteria commonly exists in the body but does not usually spread to certain organs.

When it does, it may cause sudden shock, malfunction and necrosis of tissues. The blood, muscles and lungs may be targets.

It is unclear why the disease sometimes becomes fulminant — a medical term to describe the sudden, severe onset of a condition.

Of the 712 patients reported between 2012 and 2014, 207, or 29 percent of the total, died. As many as 76 percent of the fatalities occurred within three days after symptoms emerged, it said.

The Ebola virus has a mortality rate of about 50 percent, while MERS, or Middle East Respiratory Syndrome, is about 40 percent.

Patients are usually treated with antibiotics and, in severe cases, removal of dying tissue or amputation.

The majority of patients are aged over 60 but younger people, including children, also contracted the disease, the NIID official said.

People normally contract it from contact with the wounds of infected people, but there have also been cases in which it was unclear how the patient became infected, the official said.