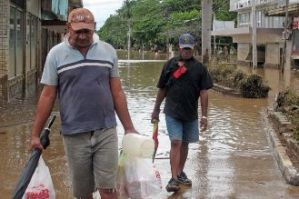 The death toll from the floods has risen to five after some of the worst flooding the country has seen in decades.

Officials in Fiji say locals are likely to be spared a further heavy downpour, with Cyclone Daphne, which formed on Monday afternoon, expected to pass by the island.

Tafazul Gani, a correspondent for a Fijian magazine, says many of the island’s residents are struggling to cope.

If you look at the town, the town is totally decimated. It actually looks like a warzone. There is not a single shop in the town which has not been affected.

“A lot of people are thinking ‘what do we do next? How do we cope?’ And having two floods in a matter of a couple of days, a lot of people they don’t have basically anything,” he said.

Mr Gani is in one of the worst affected areas of Nadi. He says flood damage there is extensive.

“Basically, if you look at the town, the town is totally decimated. It actually looks like a warzone,” he said.

“There is not a single shop in the town which has not been affected. Some shops actually have nothing left, everything that was in the shop, the counter, the merchandise, everything got washed away.”

But floodwaters have now begun to drop and the clean-up has started.

Tourist flights into Nadi have resumed but power is still cut off in many areas.

“It’s quite extensive. In Nadi town, shops in Nadi town, the floodwaters went right through that,” she said.

“The bridge hasn’t been damaged but the infrastructure around the bridge, you can see, electricity’s out, water’s out. There is quite a lot of damage here.”

Ms Johns says a child is the latest victim of the floods.

“A three-year-old boy has drowned in a creek today (Monday), late this afternoon,” she said.

“We continue to warn the general public about the speed of the rivers here and, you know, it’s such an unfortunate death of an infant.”

Over the past few days about 8,000 people sought refuge in evacuation centres.

Ms Johns says some have now started to return home.

“It hasn’t rained up here at all in the last 12 hours, which is great. So people are actually starting to return to their homes,” she said.

“I was just at an evacuation centre in Nadi where there was a four-day-old baby and her mother, and they were all doing very well.

“They’re being well looked after that, rations are getting to them. We’re … organising water sterilisers for the children especially.

“So evacuation centres we would expect that to decrease slowly over the coming days.”

Tourist flights into Fiji were stopped last night but most airlines have resumed all services.