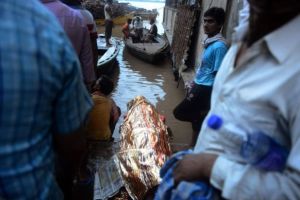 Floods in India’s holy city of Varanasi in the northern state of Uttar Pradesh have forced a halt to cremations along the banks of the river Ganges.

Officials say some people have carried out cremations on the terrace roofs of houses in the city.
Many Indians regard the Ganges as holy and use its bank for cremations.

Hindus believe that if a person is cremated in Varanasi, the deceased will achieve release from sufferings of the cycle of birth and death.

Two of the 80 ghats – a series of steps going down to the water – lining the Ganges in Varanasi specialise in the business of human cremation.

Utpal Upadhyay, a long-time city resident, said this was the “worst floods in the holy city since 1978”.
“The Ganges has risen, the banks are inundated, and people are not able to cremate. People are praying in their homes and flooded streets,” he told the BBC.

Cremations have been also affected in the Hindu holy city of Allahabad, also in Uttar Pradesh, where pyres were being lit in the nearby alleys, an official said.

Floods across large swathes of India have killed at least 40 people and displaced tens of thousands of people.
More than 100,000 people have left their homes in recent days in Uttar Pradesh and the neighbouring state of Bihar as rain-swollen rivers have burst their banks, reports say.