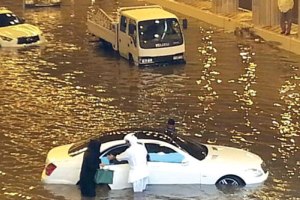 Gas-rich Qatar has ordered an investigation after a year’s worth of rain in one day paralysed some of the country’s infrastructure and exposed failings in some construction projects.
Heavy rain on the Arabian Peninsula also affected oil giant Saudi Arabia, where one person was killed.

Some reports indicated that the area around Doha’s Hamad international airport received 88 millimetres of rain in a matter of hours, well above the national annual average of 74 millimetres.

Huge leaks were sprung in the airport building, schools and shopping malls were closed and the US embassy in the Qatari capital was forced to shut as a result of the deluge.

Some companies may face prosecution as a result of the chaos, with Prime Minister Sheikh Abdullah bin Nasser Khalifa al-Thani calling for an investigation.

“It was decided to refer all stakeholders and companies implementing the flawed projects that were revealed by the rainy weather currently experienced by the country, to investigate and the to (prosecute),” he was quoted as saying by news wire AFP.

One person was killed by flooding in Rimah, outside the Saudi capital of Riyadh, as heavy rains swept across the major Opec nation.

There are no reports to disruption or damage to oil or gas operations in Saudi or Qatar.