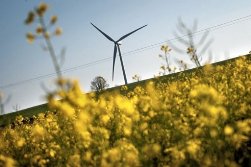 Boosting energy efficiency and renewables and providing food for a future world of eight billion will dominate next year’s UN Rio+20 conference, the talks’ co-coordinator said on Thursday.

The June 4-6 event in Rio de Janeiro is taking place 20 years after the landmark 1992 Earth Summit that set down UN conventions for protecting biodiversity and tackling climate change.

In a meeting with journalists in Paris, envoy Brice Lalonde, a former French ecology minister, said next year’s event “will probably confirm the principles of Rio.”

But, he indicated it would not launch any top-down projects on a similar horizon-scanning scale.

“1992 was just after the fall of the Berlin Wall, so the geopolitical situation was different compared with today,” said Lalonde, saying many countries today fretted about their budgets and prospects for growth.

As a result, the focus in Rio will be on the “green economy” and on practical work to spur sustainable development, he said.

“At the top of the list is energy, which of course is the key for addressing climate change,” Lalonde said.

The conference could endorse pledges to provide universal access to energy, halve “energy intensity” and double the share of renewables in the world’s energy mix by 2030.

Food security would be another target. The world’s population is officially set to reach seven billion on October 31, and is likely to reach eight billion within another two decades.

“With a billion more people coming onto the planet by 2030, how do we boost nutritional security but without using more water, land or energy?” said Lalonde.

Other likely “concrete” objectives will be cooperation on improving the quality of life in cities, saving the oceans from pollution and over-fishing, and strengthening international help in disasters, a request put forward by Japan, he said.

The UN is canvassing governments and non-governmental organisations for their views on what the conference’s political document should contain.

These opinions will be condensed into a “zero draft” that will then be hammered out in negotiations due to finish in late May, said Lalonde.

Apart from the talks at political level, the conference will also host meetings gathering activists, businesses, donors and representatives from regions and cities.

“Action starts at the local and national level. Nothing will happen at UN level if nothing happens in individual countries,” said Lalonde.

Rio+20 has not been designated a summit because heads of state and government have yet to say whether they will attend. The last big environmental summit, in Copenhagen in December 2009, which sought to seal a global pact on a climate change, was a near-fiasco