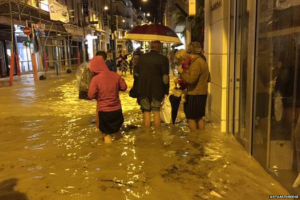 Three elderly people drowned when their retirement home near the city of Antibes was inundated with floodwater.

Others died trapped in their cars in tunnels and underground car parks as the waters rose.

He thanked rescuers and expressed the “solidarity of the nation”.

Mr Hollande offered condolences as he visited the retirement home in the town of Biot and urged residents in the region to remain cautious, saying: “It’s not over.”

Heavy rain hit the French Riviera, which lies on the Mediterranean coast and borders Italy, on Saturday evening.

The city of Nice is estimated to have received 10% of its average yearly rainfall in two days alone.

The river Brague burst its banks, sending water coursing into nearby towns and cities. Social media pictures showed water gushing down the streets of Cannes.

Cannes resident Katya Higham-Stoianova told the BBC: “It was terrifying. We wanted to go out but decided not to as the rain was unbelievably heavy. The level of water was rising very quickly.”

Cannes mayor Davis Lisnard said: “Some cars were carried off into the sea. We have rescued a lot of people, and we must now be vigilant against looting.”