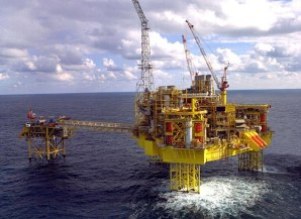 An exclusion zone has been put in place around a North Sea oil and gas well, where a plume of gas was seen rising above the water after a “serious” leak.

The potentially explosive natural gas is escaping from Total’s Elgin platform , and officials have admitted it could take up to six months to plug the leak.

The well, which normally has 238 workers, has been evacuated and the facility powered down.

Ships have been told not to pass within two miles of the rig and an air exclusion zone extends to three miles around the location, which is 150 miles off the coast of Aberdeen.

As well as the gas cloud, a sheen of oil was visible on the water.

“Initial reports from OSRL indicate no change in the size and appearance of this over the course of Monday,” the rig’s operator said.

David Hainsworth, health, safety and environment manager at Total Exploration and Production UK Ltd , said: “The well itself could die on its own. This is the dream option.”

However, he added that the company was looking into two possible options to intervene and halt the leak.

“One is drilling a relief well which could take about six months. The other is a platform intervention to kill the well,” he said.

“This would be a faster option.”

Mr Hainsworth said a gas reservoir thousands of metres below the surface of the North Sea was believed to be the source of the leak.

Engineers are being drafted in to help cap the leak, including specialists from Wild Well Control, a company that was heavily involved in efforts to control the Deepwater Horizon oil spill in the Gulf of Mexico in 2010.

The gas, which contains poisonous hydrogen sulphide, should disperse in the atmosphere, according to officials.

However, it does pose a risk to anyone close to the source and threaten nearby fish and other marine life.

Martin Preston, a marine pollution expert from Liverpool University, said: “If there’s a lot of it being belched out, it’s horribly poisonous.”

However, he said the surface oil slick, formed by gas condensates, should evaporate fairly quickly, particularly in the mild, breezy conditions on the North Sea at present.

“The size of the sheen is one-sixteenth of the size of an Olympic swimming pool,” he said.

“Any leak we take very seriously and I think the right measures have been taken.”

Oil company Shell has also evacuated two facilities it owns within about three miles of the Elgin platform.

It removed 85 staff from its Shearwater platform and the nearby Noble Hans Deul drilling rig as a precautionary measure.

Drilling operations on the Noble Hans Deul rig have been suspended and the wells have been left in a safe state in what Shell described as a “prudent precautionary measure”.