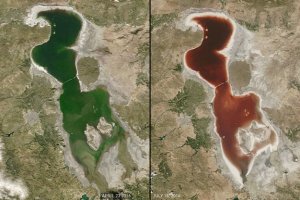 Like the famous Aral Sea between Kazakhstan and Uzbekistan and the Salton Sea in California, the salty expanse of Lake Urmia in Iran has been drying up and shrinking for decades. Now the lake, once one of the largest in the Middle East, looks more like a gigantic crime scene.

In late April, NASA’s Aqua satellite captured Lake Urmia with a deep green hue. But as of mid-July, the body of water was filled with algae and bacteria that turned it into a stained red pool.

Drought, heat, and increased demand for irrigation water have been steadily shrinking the salty lake in northern Iran near the Turkish border. As the lake dries out, its salinity increases. The warm water’s high salt concentration makes what’s left of the lake a prime breeding ground for Dunaliella algae, which can turn the water blood-red.

“In the marine environment, Dunaliella salina appears green,” Mohammad Tourian, a scientist at the University of Stuttgart, tells NASA. “However, in conditions of high salinity and light intensity, the micro-algae turns red due to the production of protective carotenoids in the cells.”

A family of bacteria called Halobacteriaceae may also play a role: These salt-loving organisms use a red pigment to absorb sunlight and convert it into energy, so large amounts of them in the water may be contributing to the ruddy hue.

Lake Urmia’s color-changing process has happened before. Spring rains and melting snow from nearby mountains normally wash freshwater into Lake Urmia, helping to stabilize its salinity and thus its color. But as drought and agricultural use persist in the region, red waters may become a more common sight.

Based on satellite observations, Lake Urmia has lost about 70 percent of its surface area in the past 14 years. Sharp, white salt crystals left behind by evaporation now surround the shrinking rust-colored pool, driving away tourists and migratory birds. The lake was once one of the world’s largest brine shrimp habitats, but water loss and higher salinity are cutting into their growth and reproduction.

“If land use and water consumption remain as it is now, then the lake would disappear pretty soon,” Hossein Akhani, a biologist at the University of Tehran, tells Scientific American. “There’s no doubt about that.”